Translations in other languages are welcome

Please send them to info@andersenstories.com

The three snake-leaves
The brothers Grimm →

The mouse, the bird, and the sausage
The brothers Grimm →

A fairytale by Hans Christian Andersen Andersen
8.8/10 - 11 votes
The swan's nest
Between the Baltic and the North Sea there lies an old swan's nest, wherein swans are born and have been born that shall never die.

In olden times a flock of swans flew over the Alps to the green plains around Milan, where it was delightful to dwell. This flight of swans men called the Lombards. Another flock, with shining plumage and honest eyes, soared southward to Byzantium; the swans established themselves there close by the Emperor's throne, and spread their wings over him as shields to protect him. They received the name of Varangians.

On the coast of France there sounded a cry of fear, for the blood-stained swans that came from the North with fire under their wings; and the people prayed, "Heaven deliver us from the wild Northmen."

On the fresh sward of England stood the Danish swan by the open seashore, with the crown of three kingdoms on his head; and he stretched out his golden sceptre over the land.

The heathens on the Pomerian coast bent the knee, and the Danish swans came with the banner of the Cross and with the drawn sword.

"That was in the very old times," you say.

In later days two mighty swans have been seen to fly from the nest.

A light shone far through the air, far over the lands of the earth; the swan, with the strong beating of his wings, scattered the twilight mists, and the starry sky was seen, and it was as if it came nearer to the earth. That was the swan Tycho Brahe.

"Yes, then," you say; "but in our own days?" We have seen swan after swan soar by in glorious flight. One let his pinions glide over the strings of the golden harp, and it resounded through the North. Norway's mountains seemed to rise higher in the sunlight of former days; there was a rustling among the pine trees and the birches; the gods of the North, the heroes, and the noble women, showed themselves in the dark forest depths.

We have seen a swan beat with his wings upon the marble crag, so that it burst, and the forms of beauty imprisoned in the stone stepped out to the sunny day, and men in the lands round about lifted up their heads to behold these mighty forms.

We have seen a third swan spinning the thread of thought that is fastened from country to country round the world, so that the word may fly with lightning speed from land to land.

And our Lord loves the old swan's nest between the Baltic and the North Sea. And when the mighty birds come soaring through the air to destroy it, even the callow young stand round in a circle on the margin of the nest, and though their breasts may be struck so that their blood flows, they bear it, and strike with their wings and their claws.

Centuries will pass by, swans will fly forth from the nest, men will see them and hear them in the world, before it shall be said in spirit and in truth, "This is the last swan, the last song from the swan's nest." 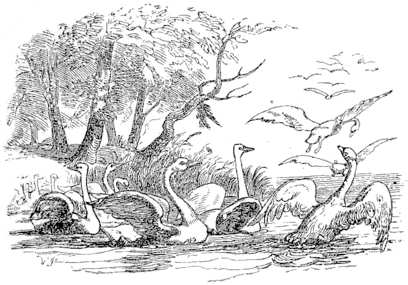 The little mermaid
Read the story →

The princess and the pea
Read the story →

The ice maiden
Read the story →

The ugly duckling
Read the story →

The shepherd boy
Read the story →